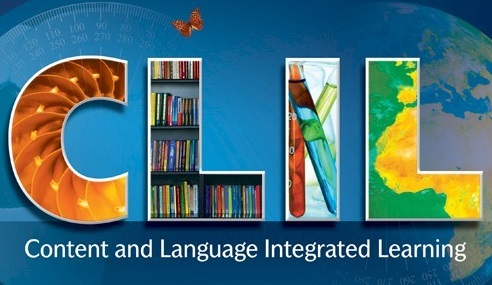 CLIL is an abbreviation for Content and Language Integrated Learning. It is a way of teaching where subject content –for example, history, science or physical education– is taught in another language (often English) (Dale and Tanner, 2012, p.3). More specifically, the definition of CLIL by Coyle, Hood and Marsh (2010, p.1) is:

Content and Language Integrated Learning (CLIL) is a dual-focused educational approach in which an additional language is used for the learning and teaching of both language and content. That is, in the teaching and learning process, there is a focus not only on content, and not only on language. Each is interwoven, even if the emphasis is greater on one or the other at a given time.

Being a CLIL subject teacher, you interweave language into your lessons; and as a CLIL language teacher, you interweave the subject into your language lessons (Dale and Tanner, 2012, p.3). A CLIL teacher sometimes focuses on the subject –the content of the lesson– and sometimes on the language. But there are times that a CLIL teacher is focused on both – the content and the language. Thus, CLIL is not teaching in another language but teaching through another language.

The implementation of CLIL teaching method in primary and secondary schools is heavily related to the need for plenty of practice in a foreign language, without actually increasing the number of language classes.

According to Coyle et al. (2010), the benefits for CLIL learners are the following:

Learning a subject through another language can provide extra motivation for both the language and the subject. Learners feel challenged as they develop a strong sense of achievement as far as the subject is concerned and they can also notice that they rapidly progress in their other language.

Cognitive learning theories suggest that people remember things more effectively if their brains have to work harder to complete a task. Learning a subject through another language may broaden and deepen CLIL learners’ understanding of subject concepts, their thinking skills and their creativity.

Through CLIL, learners develop an ability to understand a wide range of spoken and language in both general and more specialised topics.

Constructivist theories of learning suggest learners build up knowledge for themselves and that learning involves making personal meaning of new material and combining it with what is already known. In CLIL lessons, learners link new information or ideas in another language to previous content or language knowledge in their first language.

In order to learn a language, you need to hear and read it, understand it, use it to speak and write in meaningful interactions and notice how the language is used in practice. All of the above happen in CLIL lessons as learners spend time on how language is used (form), as well as what is being said (meaning).

Language input alone is not enough for someone to learn a language. Learners also need to understand the input offered to them and this input needs to be meaningful, relevant and realistic. There should also be plenty of it and multimodal, that is “live” or recorded spoken input, written input, visual input in the form of gestures, objects, videos, photographs etc. CLIL lessons promote second language acquisition through activities that give learners the opportunity to actively process input through different activities.

Learning is a social, dynamic process while learners learn by interacting with one another. Learners who focus on communicating about the meaning of what they are learning are likely to be more effective language learners than those who concentrate mainly on grammatical accuracy.

During CLIL lessons, learners need to produce language, in other words, to speak and write. In this way, they are also given the chance to experiment, be more creative and make mistakes in order to learn.

CLIL learners learn about ideas and communicate with people from other cultures. They explore international perspectives according to the subjects they are learning. Material may contain cultural information while many CLIL learners communicate with learners in different cultures through exchanges or video conferences, projects etc.

CLIL learners learn about the “culture” of a subject

Learning a subject involves learning the language of a subject and how each subject has its own language and “culture”. For example, history teachers do not only teach information but also teach their learners to think, act as historians and use the language the way a historian would use it. So, CLIL teachers do not only teach information but they also teach learners to think, write and speak like subject specialists.

CLIL learners are prepared for studying in another language

CLIL lessons appeal to a variety of learning styles as learners are given the opportunity to produce and process information and language in a variety of ways.

Benefits for teachers and schools

According to Dale and Tanner, “the implementation of CLIL encourages whole school development and innovation: implementing CLIL can be a powerful impulse for renewal and reflection in a school. It can also be an impulse for a school to think about language policy, not only for English but also about other languages taught in school (Dale and Tanner, 2012). Another important aspect is the fact that subject and language teachers may collaborate more to work on cross-curricular activities and projects.

Owing to the above benefits for learners, teachers and schools, CLIL is sometimes referred to as having “4 Cs” as components: content, communication, cognition and culture (Coyle, 2007; Coyle, Hood and Marsh, 2010). These 4 Cs help us to more easily define the aims and outcomes of teaching CLIL.

Some CLIL programmes teach different subjects in a cross-curricular way. For example, learners can be taught the history, geography and art of a particular area – something that often happens in primary schools (Bentley, 2010, p. 7).

CLIL aims to increase STT (student talking time) and reduce TTT (teacher talking time). It also encourages self-evaluation and peer and group feedback. Thus, learners have to produce subject language in both oral and written forms. Language becomes a tool of communication and not an end in itself (Bentley, 2010, p. 7).

In order learners to deal with CLIL lessons, they need to use reasoning, creative thinking and evaluating. Thus, cognitive and thinking skills go hand in hand with CLIL as learners need to study subjects from the curriculum (Bentley, 2010, p. 7).

The role of culture, understanding ourselves and other cultures play an important role in CLIL. Learners need to communicate in a non-native language while it also gives learners opportunities to introduce a wide range of cultural context. These learners are given the opportunity to have positive attitudes towards other cultures and become aware of the responsibilities of global as well as local citizens. Moreover, beyond the classroom, CLIL learners usually make links with partnership schools and use the Internet to communicate with learners across the world about either international or local projects.

The spread of CLIL

The growing interest in CLIL as an improved method of L2 teaching has resulted in enthusiasm. There is little question that providing students with opportunities in school to acquire competence in a second language will better prepare them to become citizens of the world. CLIL programmes provide more hours of contact with the second language and have made the learning of it better (Cenoz, Genesee, Gorter, 2013).

According to Ioannou Georgiou, CLIL is not an approach that suits all contexts and it is not necessary for it to be so. Indeed, as mentioned earlier, it is crucial that CLIL is carefully defined so as not to exceed its scope. It is important for it to remain content driven and clearly distinguish itself from other content-based or topic-based language-learning approaches. CLIL can support language learning by creating opportunities for authentic, meaningful learning in a different context than that of a language classroom. In this way, there will be opportunities for more varied interactions, an increased exposure to language input and more time to engage with it: all important factors for effective language learning (Ioannou Georgiou op.cit.).

The implementation of CLIL programmes at I.M.Panagiotopoulos School

CLIL at I.M.Panagiotopoulos School functions as an umbrella term that embraces a wide range of bilingual education programmes. More specifically, CLIL programmes are realised either through the teaching of specific subjects in English or the implementation of project-based education for specific learning areas to be covered. With respect to the language learning skills, the receptive skills (i.e. reading and listening) are the ones most positively influenced from CLIL. This may be the result of learners’ extensive exposure to the written and spoken language in CLIL contexts. Oral skills also seem to be clearly benefited. CLIL learners, as compared to their non-CLIL peers, tend to be more fluent in English. In addition, CLIL learners tend to be more creative and willing to take risks and experiment with language in a challenging way. In this way, English has become a learning tool for I.M.Panagiotopoulos School students to improve themselves in terms of language, cognitive development and creativity.

*Eva Kaliskami, MSc in Applied Linguistics, is an EFL/ESL Teacher and Head of English Department at I.M.Panagiotopoulos School